Four days of unparalelled scenery and challenging walking lay ahead as I sped along the motorway to County Galway. I was almost dribbling with anticipation as Maam Cross got closer, 33km....24km....18km....9km... 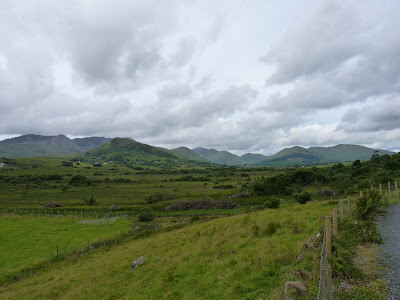 A sense of utter relaxation enveloped me as the view of the Maum Turks unfolded, their rocky summits lined up one after the other in glorious fashion.  They have the look of a 'proper' mountain range, austere and forbidding yet their highest peak just about sits on the 700m contour. 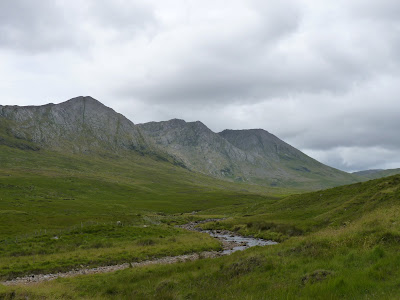 The 'turks' as I shall now refer to them have long been on my to do list. After my jaunt along their length, I realised they had been on that list far too long. 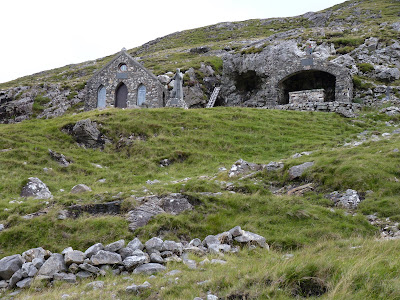 I set off mid afternoon with nobody in sight, a common theme during this trip. The only contact I made with other people on the four days was a brief chat with two young German guys from Frankfurt. They were walking the western way which threads through the turks at Maumeen, a broad col with a holy well and small chapel which seems to be kept in fairly good order. 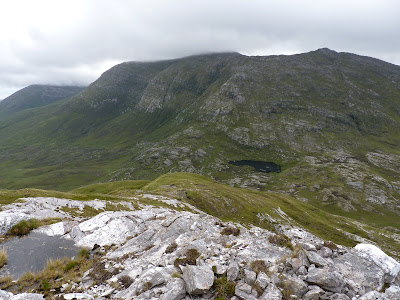 From here, I ventured onwards and upwards, this time into the dreaded stratus cloud that had enveloped the upper reaches of the mountains as I chatted to Maik and Henning. The turks are notorious for being difficult to navigate, even for the most proficient of orienteers. In the mist, I reminded myself continually, 'trust the compass, it never lies'. I did just that and made it to the summit of Binn Chaonaigh eventually singling out the seemingly highest cairn in the area. 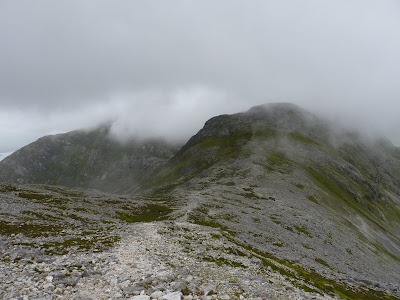 A brief clearing of the surrounding mist afforded a glimpse of the terrain that lay ahead. I would describe the turks as a complex range, made up of steep descents, angular rocky summits, deep and potentially dangerous bogs, multiple cliff edges and sheer drops.

In mist or low visibility, these mountains represent a real challenge to walkers as to complete the traverse requires concentration, good decision making and experienced interpretation of the varied terrain. That brief clearing of cloud did wonders for my confidence with the compass as I realised I was exactly where I should be. I continued on to the highest summit, 'Binn Idir an da log' with the knots in my stomach loosened somewhat. 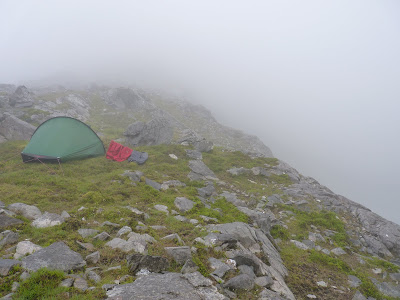 From the col after Binn Chaonaigh, I re-entered the gloomy, silent mist. I wouldn't complete the entire range this time round, being a linear route I had no way to get back to the car other than turning back on myself and retracing my steps. I got as far as Letterbreckaun before doing just that, stopping on a shoulder of Binn Idir an da log to park the tent and set up camp. 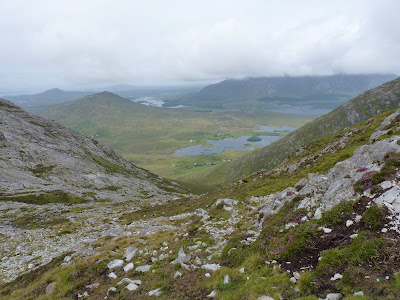 That night in the tent was without doubt the most silent and still I had ever experienced. No surprise then that I had a most refreshing sleep, which was great, because there was still some serious walking to be done over the next two days. I broke camp in the early morning light which was filtering through the thick mist and found my way back to the car a few hours later. With more new territory on the agenda, Ben Creggan and Ben Gorm my next destination, I headed on feeling like a child in a sweet shop. Bloody marvellous.
Posted by One Foot in the Clouds at 11:00 PM

Got something to say? Please do...

One Foot in the Clouds
Me? Im a keen walker who adores all things outdoor related, especially walking our awesome hills and mountains. I also have a penchant for trawling through gear websites for hours at a time.